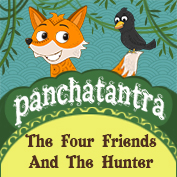 A long time ago, in a jungle there lived a deer, a mouse and a crow. They were very good friends. They used to spend most of their time with one another and had their meals together.
One day, a turtle came to them and said, “I’m all alone in the jungle. I also want to join your group and become your friend.”

“You are most welcome to join our company,” the three friends said. The crow asked the turtle, “But what about your personal safety? You know that the jungle is full of dangers. Many hunters keep coming to the forest regularly. Suppose a hunter attacks, how will you save yourself?”

The turtle replied, “That is the main reason why I want to join your group.”

The four friends had hardly finished talking when they noticed a hunter approaching them. Quickly, to save their lives, the deer ran away into the forest, the crow flew high in the sky and the mouse darted into a nearby hole. Turtles, as we all know, are slow creatures. The turtle could not crawl away fast enough and the hunter trapped him in a net. Though the hunter was disappointed on not being able to catch the deer, he thought that it was better to at least have a turtle to eat rather than going hungry.

The deer, the mouse and the crow were very worried to see the turtle getting trapped. They sat together to think of a plan for freeing their friend from the hunter. Together, they came up with a plan and started working on it.

First, the crow flew high up in the sky to locate the hunter. He spotted him next to the river. Then, the deer overtook the hunter, unseen, and went and lay at a little distance, pretending to be dead. When the hunter reached this spot, he saw the deer lying on the ground. He thought that the deer must be dead. He was very happy at having found a deer finally. He thought that he would feast upon the deer’s flesh and sell its skin in the market for good money. So, he put the turtle on the ground and started moving towards the deer. As soon as the hunter left the turtle’s side, the mouse appeared out of a hole and nibbled off the net in which the turtle was trapped.

The hunter, completely unaware of the animals’ plan, walked towards the deer thanking his stars. But, as soon as he came near the deer, the deer suddenly got up and bolted into the forest. The hunter was completely taken by surprise. Before he had time to react, the deer was gone. Dejected, the hunter went back to the place where he had set the turtle down. He was shocked to see that the turtle was gone! There was only a piece of nibbled net lying on the ground. By the time that the hunter was away, the turtle, freed by the mouse had crawled to the river and swam away.

These strange occurrences were too much for the hunter. For a moment he thought that he must be dreaming. But the damaged, gnawed-through piece of net was evidence that all these things had truly happened. The hunter could not think of any explanation for these strange happenings other than that it was just a miracle. Scared out of his wits, the hunter ran away from the jungle as fast as he could.

The turtle thanked his three friend for saving his life. Thereafter, the four friends lived happily. This story tells us that a friend in need, is a friend indeed.