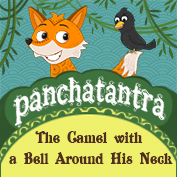 Once, there lived a cart-maker named Ujjwalaka. His business was not doing very well and he was not able to make enough money to run his household comfortably. So, he decided to settle down in another town and try his luck there.

Meanwhile, the cart-maker had made quite a fortune for himself. He started out by selling the female camel’s milk and earned a lot of money. After a while, with this money, he bought another female camel. Like this, his money kept increasing and soon he was the owner of a number of camels.

One day, as the herd of camels was grazing in the jungle, a lion happened to hear the jingling of bells. He followed the sound and saw the herd of camels. He was tempted and started planning an attack. He noticed that one young camel with a bell around his neck lagged behind the rest of the herd. The other camels grazed till their stomachs were full and then headed back home. But this young camel loitered around, still grazing in a leisurely way. The lion thought that this would be an easy prey. He hid behind a bush and waited. As soon as the young camel passed by the bush, the lion attacked him, killed him and ate him.

Had the camel listened to the other camels’ advice he would not have had this misfortune. That is why it is said that we must take heed of good advice.

Panchatantra: The Donkey Who Sang a Song