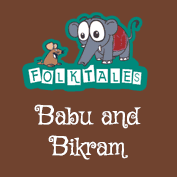 There was a dense forest in the kingdom of Mithila. A very ferocious lion lived in this forest. The people of the kingdom had stopped going near the forest for fear of this lion. But, this encouraged the lion and it started going to villages and towns near the forest and killing people. This was a cause of great trouble to the king of Mithila. Then, he thought of a solution and announced that he would give his daughter in marriage to whoever killed the lion.

Many people tried but failed. Two brothers called Babu and Bikram from a small village also set out to kill the lion. While Babu was honest and pious, Bikram was cruel and selfish. The king wanted to give both of them an equal chance to kill the lion, so he told them to enter the forest from opposite directions. When Babu entered the forest, the god of the forest appeared before him and gave him a divine bow and arrow saying, “Shoot the lion using this bow and arrow and it will die for sure. I am giving you this because you are a nice person.” Babu thanked the god profusely and went in search of the lion. After a while, he saw the lion in the distance and shot at him using his divine bow and arrow. The lion died. Babu then went near the dead lion and cut off its tail and took it with him to prove to the king that he had killed the lion.

While Babu was walking back, he came across Bikram and told him that he had killed the lion. Bikram was filled with jealousy but pretended to smile and said, “Well done, my brother. Now there is nothing for me to do here. I will accompany you to the king’s court.” They started walking together and soon came to a river that they had to cross. Here, with a swift push, Bikram threw Babu into the river and grabbed the lion’s tail from him.

He took the tail to the king and claimed his prize. The king was very happy and the marriage of Bikram and the princess was fixed to take place after six months. During this period, Bikram was given luxurious treatment and a large house to stay in. Everyone assumed that Babu must have been killed by the lion.

Meanwhile, a hunter wandering through the jungle came to the point near the river where Bikram had pushed Babu. There, he saw a small bone lying on the shore. He was curious and picked up the bone. All of a sudden, the bone started singing, “Babu was good and Bikram was bad. Babu killed the lion and Bikram killed Babu.” The hunter was amazed and took the singing bone to the king. When the king heard the song, the whole story became clear to him. He ordered for Bikram to be arrested and imprisoned.

Then, the king and the princess journeyed to the river to offer some flowers in Babu’s memory. To their surprise and delight, as soon as they put flowers in the water, Babu arose from the river. The god of the forest had given him life again. Babu got married to the princess and lived happily. He went on to become the next king of Mithila.