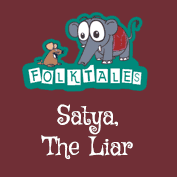 Once, there was a little girl named Satya. She belonged to a poor but honest family. One day, while Satya was out for a walk with her father, the goddess Indu appeared before them and spoke to Satya’s father, “I want to bring up Satya in heaven. Will you give your daughter to me?” Satya’s father was very pleased at the thought of Satya being brought up in heaven. He immediately let the goddess take Satya with her.

Godess Indu took Satya to her palace in heaven. She took good care of Satya, taught her many things and gave her everything she wanted. Whenever Satya did anything wrong, the goddess scolded and punished her, too.

Fourteen years passed in this way. Then, one day, Goddess Indu had to go to the earth for some urgent work. Before leaving, she gave Satya fourteen keys and said, “These are keys to fourteen rooms. You may go to any room except room number one. You must not open room number one at any cost.” Satya agreed.

Goddess Indu became very angry. She said, “You have lied to me twice. Now you cannot stay in heaven. Also, from now on, you will not be able to speak.” The goddess threw Satya out of heaven and she fell in the middle of a dense forest. Satya was scared and started crying. She kept trying to find her way out of the forest but did not succeed. She stayed there in the forest, eating the fruits that grew there.

Years passed and Satya grew into a very beautiful woman. One day, the king of the neighbouring kingdom, King Dharma, came to the forest for hunting. He heard the crying of a woman. His men followed the sound and found Satya. The king liked her a lot. He found out that she was dumb but that did not matter to him and he married her.

After a year, a baby boy was born to Satya. That night, Goddess Indu appeared in front of Satya and said, “I’m giving you a chance to tell me the truth. If you don’t, I will take your son away with me.” But Satya still refused to admit that she had opened the door. So, the goddess took Satya’s baby away.

The next morning, when the king came into the room, he found the baby missing. He thought that his queen must be a devil in disguise and ordered for her to be hanged. Queen Satya started sobbing miserably. Then, Goddess Indu appeared again in front of Satya and asked, “Well, this is your last chance. Are you willing to tell me the truth now?” Satya replied, “Forgive me, Goddess. I have been lying to you. I am very sorry. I accept now that I opened room number one in your absence.”

The goddess was pleased that at last Satya had told the truth. She accepted Satya’s apology. She gave her son back to her and also returned her the ability to speak.