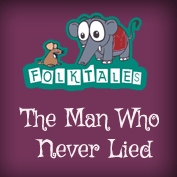 Once there was a man called Mamad. He was very popular as he had never lied in his whole life. All the people of his town and also of other towns knew about him.

One day, the news of the man who never lied reached the ears of the king. He immediately asked his courtiers to present this man in his palace. Mamad was summoned to the king’s palace.
The king looked at Mamad and asked him. “Tell me honestly. Is it true that you have never lied in your whole life? Not even once?”

“Yes sir, it is very true. I have, indeed, never lied in my whole life.”

“And is it also true that you will never lie even in the future?” the king asked him.
“Yes, sir, I will never ever tell a lie in my whole life.”

“Alright, I appreciate that. But remember it is very easy to tell a lie, so be very careful,” the king warned Mamad.

After a few days, the king once again called Mamad to his court. The king was preparing to go hunting. A large crowd had accumulated and the king was on his horse. He was holding the horse by the mane with his left foot on the stirrups.

The king then ordered Mamad, “Please go to my summer palace and inform my queen to prepare a big feast as I will be with her for lunch. And you will also come with me for lunch.”
“As you say, sir,” Mamad said to the king and bowed before him.

The king wanted to make Mamad tell a lie. So he said to his ministers, “We won’t go for hunting now, and neither will I go for the lunch. In that case, what Mamad tells the queen will be a lie.”

Mamad was an extremely wise man. He had watched the king very carefully. He went to the queen and said, “Your Highness, the king might come here for lunch or he might not, and maybe you should cook a lavish feast for him or maybe you should not.” The queen was confused and asked him “Will you please tell me clearly if the king will come for lunch or not?”

The king arrived the next day and said to his queen, “Mamad says that he never lied in his whole life, but he just did yesterday.”

The queen was confused and told him the exact words that Mamad had said to her.

The king was surprised and realised that Mamad was indeed telling the truth. He never lied and only narrated what he saw with his own eyes.