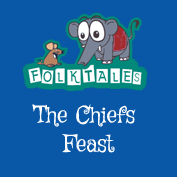 One day, the chief sent out his men to make an announcement everywhere that he was hosting a huge feast and each guest was requested to bring one calabash of palm wine.

One man was very anxious to attend the feast but did not have any wine to take for the party. On hearing about the feast, the man’s wife asked him to buy a calabash of wine and take it there. The man, however, refused saying that he did not want to spend that much money to attend a fest that was for free.

Suddenly, he had an idea, “If all the people who came to the feast fill the chief’s pot with palm wine, then no one would realise if I pour one calabash of water into that.”

Finally, the day of the feast arrived. All the people were dressed in their best clothes and were ready to attend the grand feast. The guests started arriving one by one. There was music and dance. Each guest started pouring the palm wine into the large earthen pot kept by the chief. The man who came with the water also poured it into the chief’s pot and greeted him politely.

After all the music and dance, it was finally time for drinks and dinner. The chief asked his men to pour the wine that was brought by the guests into everyone’s cup. Everyone took their first sip from the cup of wine and was shocked to get the taste of water.

Each guest who visited the feast had assumed that the one calabash of water brought by them would not make any difference if added to the pot filled with palm wine that the others would bring.