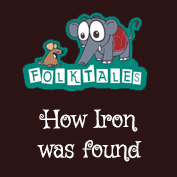 A very long time ago, in a small village lived a craftsman called Intupwa. He wanted to make different items with wood but he couldn’t, as he failed to cut the wood with sharp stones. One day, he had a dream about a new metal called iron, and he began a search for that.

Intupwa went to a tree and asked, “Can you please tell me where I will find iron?” The trees were scared and said, “If we tell you about that you will make an axe and cut us down.” He asked the same question to the grass and it gave the same reply.

He also asked the same question to the wild animals and they said, “Once you find it, you will kill us by making an arrow with it, so we will never tell you.” Then he went to the water and asked it, “Water, can you please tell me where I can find iron? I really need it.”

The water replied, “If you go to Numrang-Ningpu, you will find iron.”

Intupwa went to Numrang- Ningpu, but could not find any iron. Instead, he found a goddess who had given birth to a child that very night.

When the child was born, he was as red as fire, but became as black as iron upon cooling down. Intupwa cut a small piece of it and took it back with him. When he reached home, the small piece fell down from his hand and broke into hundreds of smaller pieces. He put the small pieces in a stream and it was carried all around the world. And this is how iron is found in most parts of the world today.

Intupwa still had a piece of iron, but did not know how to work with that. One day, while he was sitting by the stream outside his home, a huge elephant came towards his house. It crushed everything on its way, including the piece of iron. Intupwa made a hammer with the crushed iron. Then, he heated the iron, but he could not manage to hold it, as it was burning hot. He did not have any tongs.

Tired and thirsty, he went to the nearby stream to drink water. As he cupped his hand to drink some water, a crab clutched his hand. He jumped in pain and tried to remove the crab, but it was clinging on to his fingers tightly with its claws. Somehow, he got rid of it.

Suddenly an idea struck him. “If i can make something similar to a crab’s claw with an iron, then I can hold the iron with it,” he thought and made a pair of tongs. Since then, he used the tongs and started making hammers, arrows, knives, axes and many other things.