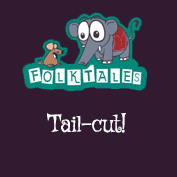 There once lived a cunning fox in a very dense forest. He was extremely mischievous and naughty. Every day he paraded through the jungle like a king. He chased some animals; bullied the innocent ones and also scared some of them by baring his sharp fangs. The animals of the jungle were irritated with his actions.

The fox was very proud of its looks, especially of its thick and bushy tail. One day while he was chasing a hare, his tail got stuck in a trap. He tried his best to remove his tail, but it would only hurt and not come out. The fox stopped trying anymore as he was worried about damaging his tail.

All of a sudden, he heard some human voices. The fox panicked; he knew that that they were coming to collect the trap. He pulled himself very hard and released himself with a jerk. He felt a terrible pain in his body but he was too scared to react and ran away without looking back even for once.

Once he caught his breath, he realized that his precious tail was missing. He felt extremely depressed and ashamed. He could imagine the sly smile on the faces of the other foxes, when they saw him tailless.

He started thinking hard. “I have to pretend that I am all right, and convince them that being tailless is a great thing. This is the only way I can escape embarrassment,” thought the fox to himself.

The same evening, there was a meeting of the foxes by the riverside. All the foxes stared at the tailless fox, astonished. The fox pretended that he was perfectly happy and unperturbed. When he saw the obvious question in the eyes of the others, he went on to explain how great it was to be without a tail.

“Folks, see I finally got rid of the tail. Being tailless is so much more comfortable and fun. Now I can move around freely without feeling heavy. I can run like a mare and can even swim faster as my tail wouldn’t be heavy with water. Isn’t it great?” exclaimed the fox.

“But the mare also has a tail,” said another fox.

“Yes, but it’s much lighter than ours, so it can run fast. Now even I can run real fast,” said the fox while trying to sound convincing.

Suddenly, an old fox stood up. “Will you please shut up now, and stop acting smart? I don’t think you are aware, but I was very much present when you ran for your life, leaving your tail in the trap, here this is for you…” said the old fox and threw his half torn tail up in the air.

Everyone stared at the tail and the fox in great disbelief. Humiliated, the fox left the place as quickly as possible.