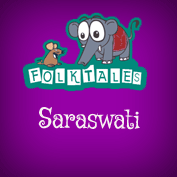 Saraswati is the Hindu goddess of knowledge, music and all the creative arts. She is called the Mother of the Vedas and the repository of Brahma’s creative intelligence. Saraswati is the daughter of Lord Shiva and Goddess Durga. She bestows upon the humans the powers of wisdom, learning and speech ,which is why she is largely worshipped by the educated and learned. They pray to her for wisdom and knowledge and believe that only Goddess Saraswati can grant them the final liberation of the soul, Moksha.

Saraswati is described as a beautiful female with four hands. Each hand represents four characteristics of human personality in learning—mind, intellect,alertness and ego. Clad in white, as a symbol of purity, the Goddess holds sacred scriptures in one hand, a lotus in the second, plays a string instrument called ‘Veena’ with the other two hands, and rides a swan. She is not adorned heavily with jewels and gold, and is dressed modestly—representing her preference of knowledge over worldly material things.

Saraswati Puja is performed on the 5th day of Magha month of the Hindu calendar. On this day, books and all musical instruments are ceremoniously kept near the goddess early at dawn and worshipped with special prayers. No studies or any performance of arts is carried out as it is considered that the Goddess herself is blessing the books and the instruments.