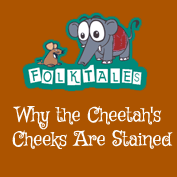 Once upon a time, there was a very wicked hunter. One day, he was sitting under a tree and lazing around. It was extremely hot and the hunter was too lazy to go out to the bushes and hunt for himself. The hunter saw a herd of fat springbok grazing on the field from a distance. Though he wished he could have one of them for lunch, he was too lazy to even get up from his place. He was staring at the springboks when suddenly he noticed a female cheetah slowly approaching the herd. The hunter kept a close eye on the cheetah. The cheetah moved closer and closer to the herd and then all of a sudden, she pounced on one of the isolated springboks and killed him in no time. The rest of the herd was terrified by the impact and raced away quickly.

The cheetah gradually dragged her prey into the nearby bushes. The hunter was still staring at the cheetah and he noticed that three very young and beautiful cubs of the cheetah were waiting for her behind the bushes. The hunter immediately felt very jealous of the cubs. They got such delicious meat without even moving a muscle. The hunter wished he too had someone to hunt for him and provide him with a lovely meal every day. Suddenly, a wicked idea struck him. He decided to steal one of the cheetah cubs so that he could train it to hunt for him. The hunter was impressed with his own idea and waited for the cheetah to go to drink water so that he could begin his mission safely.

As it got dark, the cheetah put her cubs to sleep in the bushes and proceeded towards the waterhole. The hunter waited patiently for the cheetah to be out of sight and quickly entered the bushes with his spear. The little cubs were unperturbed by the new visitor. There were too young to identify or react to an enemy. The hunter observed the three cubs carefully but all of them were so perfect that he could not pick one. The hunter thought that it would certainly be more comfortable to have all the three cubs hunt for him. So, he stole all three of them and ran away.

The mother returned about an hour later, only to find that all her three cubs were missing. She spent hours searching for them everywhere possible, but could not find them. The cheetah was heartbroken and started crying. She cried and cried for such a long time that the tears left a stain on her face. The cheetah cried the whole night. An old man who was passing by the cheetah’s house heard her crying.

The cheetah told the old man about her cubs. The old man was very wise and understood at once that this was the job of the wicked hunter. The tribe had a tradition, that a hunter can only use his own strength to hunt for himself, but this hunter had broken the tradition by stealing the little cubs of the cheetah.

The old man was very angry and told everyone in the village about the incident. The villagers got hold of the hunter who was trying to escape with the cubs. They snatched the cubs away from him and threw him out of the village. The little cubs of the cheetah were returned to her. The cheetah was overjoyed to see her cubs. However, the crying of the previous night had left a permanent mark on the cheetah’s face. Till date, the mark acts as a reminder to everyone of the fact that no one must use the strength of any other animal for hunting his own food.