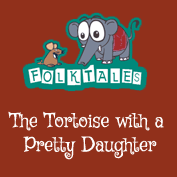 Once, there lived a very powerful king. Everyone in the kingdom always followed his orders. The king had a very handsome young son called Ekpenyon. The king got his son married to fifty young girls from his kingdom. However, the prince was not fond of any of them. In fact, he did not even like them. The king was very angry as his son rejected all the girls that he gifted him. The king also made a strict law that if anyone had a daughter prettier than the prince’s wives, and if the prince happened to like her, then the girl will be killed along with her entire family.

There was a tortoise that lived in the same kingdom. His wife gave birth to a very pretty daughter. The mother was worried that the king might find out about her beautiful daughter and might kill all of them. So she asked her husband to kill their daughter and throw her in a place where no one could find her. The tortoise was fond of his daughter and did not agree to kill her. He called her Adet. Three years later, one day when the tortoise and his wife went out to collect food, the prince came to their locality for hunting. The prince was aiming to kill a bird sitting on top of a tree. The bird was looking at the beautiful daughter of the tortoise and was simply lost in her beauty. The prince shot at the bird and it fell from the tree. When the servants went to collect the bird, they noticed the tortoise’s pretty daughter and were awestruck with her beauty. They immediately informed the prince who went looking for her. It was love at first sight for the prince. The prince was mesmerized with the beauty of the tortoise’s daughter and offered to marry her. After a lot of persuasion, Adet finally agreed to marry him. The prince went back home and did not say a word about this to his father.

The following day, the prince went to the tortoise’s house with lots of jewellery and clothes and expressed his wish to marry his daughter. The tortoise was very scared. He refused the proposal of the prince, stating that if the king found out about this then his entire family would be killed. The prince was determined to marry his daughter and said that he would get killed himself before letting anyone cause any harm to the tortoise and his family. The tortoise finally agreed to let his daughter marry the prince once she was of the appropriate age. The prince went home and confessed to his mother about his love with the pretty tortoise. The queen was extremely worried as she knew that her husband would kill his own son if he did not follow his orders. Nevertheless, she was concerned about her son’s happiness and so consented to their marriage. The next day she went to the tortoise’s house with lots of money, clothes, yam and palm oil. She gave it all to the tortoise and requested him not to marry off his daughter to anyone else. For the next six years the prince met the tortoise’s daughter frequently. Suddenly one day, the news of the prince and the tortoise reached the ears of the king. He was very angry and immediately called for a meeting at the market place to decide the fate of the tortoise family and his son.

The day for the judgment arrived and a large crowd gathered in the market place. Everyone greeted the king and the queen as they arrived and sat on their thrones. The king called for the tortoise’s daughter and the prince. The pretty Adet arrived and as soon as the king saw her, he was speechless. The king was so influenced by the astonishing beauty of Adet that he decided to forgive his son. He told his people, “Though I was angry and wanted to punish my son and the tortoise for disobeying my order, I am not angry anymore. Adet is unbelievably pretty and will make a perfect wife for my son.”

All the people in the market place were also influenced by Adet’s beauty and agreed that she was suitable enough to marry the prince. They urged the king to abolish the law which stated that anyone who had a daughter who was more beautiful than the prince’s wives would be killed. The law was made under the ‘Egbos,’ thus the king sent the message to the eight Egbos that the law was abolished in his kingdom.

The king finally announced the wedding of prince with the tortoise’s daughter Adet. On the day of the wedding, a huge feast was arranged. People were served with huge amounts of meat and wine. Singing and dancing continued all through the night. After the wedding was over, the king gifted half of his kingdom to the tortoise. He was also given a few hundred slaves, two hundred women and around a hundred girls to help him rule the kingdom. The tortoise family became extremely rich and the Prince and Adet lived happily ever after.