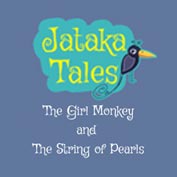 Another great story from Jataka Tales. A long time ago, a king named Brahmadatta ruled the city of Banaras. His chief of guards, Bodhisattva, was a very wise and knowledgeable man.

One day, the queen and her friends were walking in the palace gardens. It was a hot summer day, so they decided to get some respite from the heat by swimming in the royal pool. Before going in the pool, the queen took off her pearl necklace and gave it to her maidservant for safekeeping. The maidservant put the necklace in a wooden box and sat down under a tree to watch the royal ladies have fun in the pool.

Some monkeys used to live on the trees near that pool. A little girl monkey had got a glimpse of the queen’s shining pearl necklace and was besotted by it. She imagined how beautiful would she look with that necklace around her own neck. So, she waited around, hoping that the maidservant who was guarding the wooden box would soon fall asleep. The girl monkey did not have to wait for long as the maidservant who was tired of watching the queen playing with her friends, began to nod in the heat of the day and was finally fast asleep.
Quick as lightning, the girl monkey jumped down, filched the necklace and hurried back to the tree. She put the pearl necklace around her neck and admired herself for a while. Then, not wanting the other monkeys to see it, she hid the string of pearls in a hollow of the tree.

When the maidservant woke up, she was petrified to see that the necklace was gone. She screamed at the top of her voice, “Somebody has stolen the queen’s pearl necklace!”

The palace guards came from all around and ransacked the royal garden in search of the so-called thief. There was a homeless man loitering outside the walls of the garden. He heard the commotion and sure of being accused, took to his heels. This made the royal guards suspicious. They nabbed him and started beating him up. The man denied stealing the queen’s necklace, but the guards were not ready to believe him and beat him further. The man feared that the guards would probably beat him to death if he kept denying it, so he confessed to the theft.

The man was produced before the king and charged with the theft of the queen’s necklace. The king was outraged to hear the whole story and asked the man in a firm tone, “You have committed a serious offense! Now, tell us what did you do with the pearl necklace?”
In an endeavour to take off the blame from his shoulders, the man replied, “Your majesty, I am a poor man. What would I do with the string of pearls? All I needed was some money to buy food to eat. It was the treasurer who lured me into stealing the necklace. I stole it from the garden and gave it to him. He knows all about it.”
The king sent for the treasurer, and interrogated him on whether the poor man had passed the necklace to him or not. The treasurer also thought on the same lines as the poor man and in order to save his skin, confessed to the crime. The king asked, “What have you done with the string of pearls?” Emulating the poor man, the treasurer transferred the blame on the royal priest and said, “I was working under the directions of the royal priest and the pearl necklace is at his house.”

So, the royal priest was summoned on the king’s court and questioned in the same way. Seeing no other way out of the situation, the royal priest also confessed to his involvement in the crime. He also made a statement that he had given the necklace to the chief musician, who in turn said that he had gifted it to a dancer. When the dancer was presented before the king, she denied ever having received it.

Bodhisattva was also present in the king’s court and was attentively listening to the versions of all the accused people. He found it difficult to believe that anyone could enter and escape the royal garden without being noticed. He was sure that none of the accused had to do anything with the theft and they were shifting the blame onto each other, just to save themselves from the wrath of the king. He went to the garden and again inspected the whole area where the incident had taken place. He also noticed a group of monkeys swarming in the trees of the garden. He thought that perhaps it was the deed of those naughty monkeys and perhaps they were the real culprits. In order to confirm his suspicion, he got a number of glass bead necklaces made. He then went to the garden and placed them below the trees where the monkeys lived. All the monkeys were charmed by the shining glass beads of the necklaces. Each one of them came down and picked up a string except for the girl monkey who kept sitting contently on a tree. She was not at all interested in collecting a string of glass beads for herself.
Bodhisattva hid behind a large rock with other guards and waited. All the monkeys were prancing around and showing off their necklaces. The girl monkey could not control the urge to show off her prized possession as well. She pulled out the pearl necklace from the hollow of the tree and put it around her neck. Then she proudly called out to other monkeys and said, “Look here! All of you have got just ordinary glass bead necklaces, but mine is made of real pearls.”

At that moment the guards came out and caught the girl monkey by the arm. After confiscating the queen’s necklace from the girl monkey, Bodhisattva gave her a glass bead necklace and let her go. He had thus solved the mystery of the missing necklace. The king was well pleased with Bodhisattva’s wit and rewarded him generously.