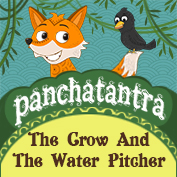 Once upon a time, there lived a crow in a jungle. One summer afternoon, he was wandering in search of water to quench his thirst. When he was flying over a village, he saw a pitcher lying in front of a house. The crow could see from the top that there was some water in it. He sat on the rim of the pitcher and bent down his beak to reach the water, but couldn’t succeed. The water level was too low in the pitcher. The crow did not have the courage in him to fly anymore. He thought for a while and suddenly a bright idea struck him. He looked around and found a pebble. He picked up the pebble in his beak and dropped it into the pitcher.

As soon as the pebble was dropped in the pitcher, the water came up a little. The crow dropped more and more pebbles in the pitcher till the water level was high enough for him to reach.

The thirsty crow then drank the water to his heart’s content and flew away. That is why it is said that efforts done with sincerity certainly meet success.