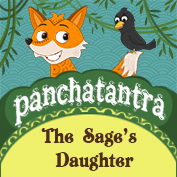 Once upon a time, there lived a sage. The sage used to go to the river everyday to pray. One day, while the sage was praying in the river, an eagle flying above him dropped a mouse that it had caught as prey. When the sage opened his eyes, he found the little mouse in his hands. He took the mouse home and showed it to his wife. Since the sage and his wife did not have any children, they decided to keep the mouse as a child. The sage, with his extraordinary powers, changed the little she-mouse into a pretty girl child. The sage and his wife brought up the girl like their own daughter.

When the girl grew up into a beautiful young lady, at the age of sixteen, the sage decided that it was time to get her married. He thought that the Sun God would be a suitable match for his daughter. So, the sage prayed to the Sun God and asked him to marry his daughter. But the girl said, “I am sorry, Father, but I cannot marry him. He is so bright and his heat is so intense that I will be reduced to ashes.” The sage was disappointed. He asked the Sun God to suggest another groom for his daughter. The Sun God replied that the Lord of the Clouds would be a suitable match for the sage’s daughter because a cloud can easily stop the sun’s light and can reduce its heat.

This time, the sage’s daughter was happy with the match. “I would like to marry a mouse very much, Father,” she said. The sage was happy and said, “That’s destiny, my child! You began your life as a mouse and you were destined to marry a mouse.” He turned the girl back into a mouse. She was married to a nice, suitable mouse and they lived happily ever after.