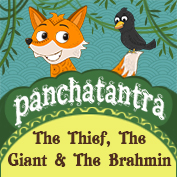 Long ago, there lived a pious Brahmin in a village. He used to earn his living by performing religious ceremonies and rituals in the nearby villages. Once, a rich man gifted him a cow in lieu of his services and asked him to sustain himself by selling the cow’s milk. The kind hearted Brahmin took very good care of the cow. Soon, the cow became very healthy and started giving a lot of milk.

So, both of them reached the Brahmin’s house together. It was almost midnight and the Brahmin was fast asleep at that time. The thief took out his pocket knife and started walking towards the cow-shed to cut the rope with which the cow was tied up. But the giant stopped him and said, “Hold on! Let me eat the Brahmin first.”

“No!” said the thief. “What if the Brahmin wakes up and runs away to call for help? If this happens, I will not be able to steal the cow. So, let me steal the cow first,” he grumbled.

The giant said, “And what is the guarantee that the cow will not create a ruckus and wake up the Brahmin? I do not agree with you! I will eat the Brahmin first.”
And thus, both of them started quarreling loudly between themselves. The Brahmin woke up because of the commotion. He overheard the conversation of the giant and the thief and understood what was going on. He recited mantras and burned the Maharakshasa with his spiritual powers. And then, he took out a big stick from his almirah and started beating the thief. The thief began to cry and ran to save his life. Thus, the Brahmin saved himself from the giant, as well as from the thief.