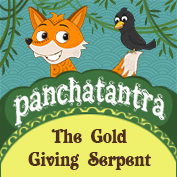 A long time ago, there lived a poor farmer named Haridatta. He used to work very hard in the fields, but his fields never had a profitable yield. One day, while watering his fields, he saw a frightful snake coming out of an anthill. He thought that perhaps the snake was the guardian of the field and since he had not paid homage to the snake, his fields never yielded the desired harvest.

He rushed home to bring some milk and offered it to the serpent in a bowl. While offering the milk respectfully, he addressed the serpent, “O, Guardian of this field! I was not aware that you lived here, that is why I never offered you anything. I will not make this mistake again. Please forgive me.”

One day the farmer had to go to town for a few days for some urgent work, so he asked his son to take care of the serpent. The son brought the milk to the anthill and offered it to the serpent. Next day, when he came back to collect the bowl, he found a gold coin in it. He thought, “This anthill must be full of gold coins. I can kill the serpent and take them all.” Next day, he offered the milk to the snake and as soon as the serpent leaned down to drink the milk, he struck the serpent’s hood with the stick. The snake escaped the blow of the stick and bit the boy to death.

When the farmer returned to his village and came to know about the death of his son. He was full of grief but did not discontinue his daily practice. He went near the anthill and called out to the serpent.

The serpent came out of the anthill and replied, “My dear man, I know that you have come here just driven by your greed. Your greed has brought you to feed the serpent who bit your son to death. Neither can I forget that stick’s blow nor can you forget the pain that I have caused you. So, it is best for us to part ways.” After saying this, the serpent gave him a diamond and said, “Never come to me again.” Then the serpent disappeared into the anthill and the farmer never saw it again.