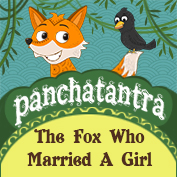 Once there was a poor man who lived in a village. He had a very beautiful daughter. There was a dense forest near the village in which there lived a fox. The fox wanted to marry the poor man’s daughter. One day, the fox dressed himself like a man and went to the girl’s father. He said, “Sir, I want to marry your daughter. Will you give her in marriage to me?” The girl’s father was pleased and gave his consent. Soon, the girl and the fox were married. But the girl’s father never got to know that his son-in-law was a fox.

The fox started living in the girl’s house. He enjoyed good food and was leading a life of luxury. Then, one day, the girl’s father told the fox that he should now take the girl to his own house. The fox had no house of his own. But he could not say this to his father-in-law. So, he took the girl and started walking.

A few days went by in the same way. Finally, the girl understood that her husband had no home. By this time, she had also found out that he was not a man but a fox. She said to him, “Let us go back to my house. We can live there in peace and comfort.” The fox agreed readily and they started walking back to the girl’s house. On reaching, the girl secretly told her father all about the fox. The girl’s father was filled with rage. He called a few of his friends and with their help he beat up the fox badly and chased him away.