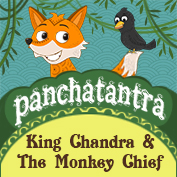 Once upon a time, there was a king named Chandra. He lived in a beautiful palace surrounded by a huge garden. Many birds used to live in this garden. A group of monkeys had also made their home in the trees of this garden.

The king had also kept a goat in the palace which his sons used to play with. This goat was a glutton and used to get into the kitchen to find food whenever he got the chance. The cooks of the palace were very irritated with the goat because of this reason. Whenever they caught the goat inside the kitchen, they used to beat him with smouldering sticks to chase him out.

The chief of monkeys used to observe this incident every day. He thought to himself, “This goat keeps going into the kitchen even after being chased out with smouldering sticks so many times. One day, some cook will get really angry and set the goat on fire. The goat’s wool-like hair will be ablaze. Then, the goat might rush to the stables in pain and roll on the hay to put out the fire. Due to that, the hay will catch fire and the horses will get injured. And since it is believed that the fat of a freshly-killed monkey can cure the burns of a horse, it will ultimately lead to the slaughter of me and my friends.”

Soon one day, the incident that the monkey chief had predicted, happened. The cooks, irritated by the goat, hit him with a burning log which set his hair on fire. The goat rushed to the stable and rolled about in the hay in an attempt to put out the fire but the hay caught fire instead. In a matter of a few minutes, the fire spread to the whole stable. Many horses were killed and many others received serious burns. The king was very upset to learn about this. He called for the veterinary doctor immediately. The doctor advised that the fat of freshly-killed monkeys could help cure the horses’ burn injuries. The king immediately ordered that the monkeys in the palace garden to be captured and killed. Hundreds of monkeys were captured, killed and their fat was used to heal the horses.

When the chief of monkeys living in a faraway forest heard about this incident, he was deeply grieved. He vowed to take revenge on the king for killing his fellow monkeys.

One day, the chief of monkeys was walking in the forest when he came across a lake that he had never seen before. He noticed a curious thing about the lake. There were many footprints going towards the lake but not a single footprint going away from the lake. This made him suspicious and he did not enter the lake. All of a sudden, a black giant appeared out of the water of the lake. He looked frightening and was wearing a necklace of jewels around his neck. The monkey chief was scared for a moment but the giant said, “You are clever. You did not enter the lake. I am pleased with you. I eat whoever enters this lake. I can eat thousands of people at a time. But I am happy with you because you are clever. So, I will grant you a favour. What would you like?”

The monkey replied, “King Chandra is a great enemy of mine. He ordered the killing of my brothers in order to use their fat to heal the burns on his horses’ skins. I want to take revenge for this evil deed.”

The monster said, “Bring him and his men to this lake and I will eat all of them.”
“Done. I will bring you a lot of royal people for your meal,” the monkey said. “But please lend me your jewelled necklace.”

The giant gave his necklace to the monkey who put it around his neck and started walking towards King Chandra’s palace. On reaching the palace, he asked to see the king and said, “Your Majesty, there is a lake of jewels nearby your kingdom. I have brought some jewels from that lake to show you.” The king looked at the dazzling jewels around the monkey’s neck. He asked the monkey to tell him more about the lake of jewels. The monkey replied, “In order to get a necklace of jewels, one has to take a dip in the water of this lake before sunrise. If you and your men accompany me to this special lake, you can find a lot of jewels there to add to your treasures.”

The king was very happy. The next morning, the king, his family and hundreds of his courtiers set out for the lake. When they arrived at the lake, the monkey chief said to the king, “My Lord, let the others take a bath first. You yourself should go into the lake last of all. Since you are a king, you will be given jewels that are more precious than the ones others receive.

The king agreed and waited on the bank as his family, friends and courtiers jumped into the lake. The king waited for quite some time for them to emerge from the water but there was no sign of anyone. Then, the monkey chief who had climbed up a high tree for his safety said, “You foolish king! Your family and courtiers are not going to come back. They have all been devoured by a black monster who lives in this lake. This is revenge for the killing of my family that you ordered. As the saying goes, ‘It is no sin to return evil for evil’. I have taken my revenge on you, king. I have only spared your life because you were once my master.”

Hearing this, the king was deeply shocked and returned to his kingdom in a state of despair.