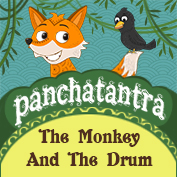 Once upon a time, there was a little monkey who lived in the forest. One day, the little monkey was playing on a tree and swinging from one branch to the other. Suddenly, he felt a sharp pain in his tail. He saw that a sharp thorn had pricked his tail. It was giving him a lot of pain. The monkey could not remove the thorn himself so he decided to go to the city. On his way, he met a man who was carrying a knife. The monkey requested the man to remove the painful thorn from his tail. The man agreed but while he was removing the thorn with his knife, he accidentally cut off the monkey’s tail. The monkey was upset and annoyed. He said to the man, “You cut off my tail! Now you will have to give me your knife. I will bite you if you don’t.” The man readily agreed to give the knife to the monkey and went away. The monkey was so happy on getting the knife that he started singing, “I lost my tail but I got a knife. Dum, dum, da dum.”

The monkey started roaming here and there with his new knife. At some distance, he came across a man who was carrying a lot of mangoes in a basket. The man did not have a knife to cut the mangoes with. So, when he saw the monkey carrying a knife, he requested him to lend him the knife. He promised that after cutting and eating a mango, he would give the knife back to the monkey. The monkey agreed and lent the man his knife. But as soon as the man started cutting the mango, the knife’s blade broke. The monkey became very angry. He said, “You have broken my knife! Now you will have to give me all of your mangoes. I will scratch you if you don’t.” The man got scared and ran away, leaving all the mangoes for the monkey. The monkey was again happy and began singing, “I lost my tail but I got a knife. Dum, dum, da dum. I lost my knife but I got mangoes. Dum, dum, da dum.”

The monkey liked the drum so much that he did not give it to anyone. He beat on it and sang his little tune. “Dum, dum, da dum.”