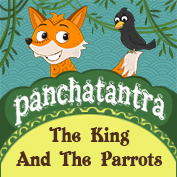 Once upon a time, a tribal king who was hunting in the forest caught two parrots in his nest. He was very pleased with this and thought that he would teach the parrots to talk and his children would be happy to play with the talking parrots.

The king was displeased on hearing the parrot talk in such a filthy way and decided to ride in the other direction. Soon, he reached the other end of the forest where the sage’s hut was situated. When the king came closer to the hut, the sage’s parrot, who was also kept in a cage outside the hut, said politely, “You are welcome, dear sir. Please come in and have a seat. Would you like a glass of water and some sweets?” After having welcomed the guest with proper manners, the parrot called out to his master, “Guruji, you have a visitor. Please take him inside and offer him some refreshment.”

The king was amazed to see the intelligence and manners of this parrot. He realized the contrast between the tribal king’s parrot who was extremely rude and the sage’s parrot who was polite and courteous. He understood that a good environment and training always give better results and that a man is known by the company he keeps.