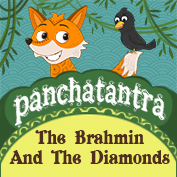 Once upon a time, there lived a Brahmin in a village. In reality, he was a conman. He performed religious rituals during the day time and robbed unsuspecting travelers during the night. He used to cheat people in various ways and steal money from them. Thus, by engaging in all sorts of criminal activities, he had accumulated much wealth.

One day, a few merchants came to the Brahmin’s village from some other town. They sold all their belongings and purchased six large size diamonds from a local jeweler. The travellers knew that there was a risk of them getting robbed on their way back, so in order to save the diamonds, they swallowed them up.

The Brahmin saw the merchants swallowing the diamonds and planned to steal them. He went to meet the merchants and became friends with them. The merchants thought of him as a simple and innocent Brahmin, and he soon won their confidence.

When the merchants left for town, the Brahmin also offered to accompany them. There was a dense forest on their way where many cannibal tribals lived. These cannibals used to eat human flesh and could understand the language of birds and animals.

The Brahmin knew that his fate was sealed and he was bound to be killed by the tribals. So, he thought of making amends for his dishonest way of life and doing something to save the lives of the merchants. He thought that maybe sacrificing his life for a noble cause would earn him a place in the heaven.

The Brahmin thus, said to the chief, “You kill me first. If you find the diamond in my body, kill all the merchants as well. But, if you do not find anything in my body, please spare their lives. The chief agreed to this and killed the Brahmin. He slit his stomach, but could not find any diamond. So, as per his promise, he allowed all the other merchants to go home.

The cannibals returned to their village, wondering whether the crows had begun telling lies, or had they failed to interpret their language correctly.