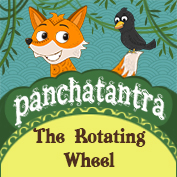 Once, in a small village, there used to live four friends. They were poor and wanted to earn a lot of money. But they had no idea about what they could do in order to become very rich.
They thought a lot and finally decided on leaving the village to go somewhere else in search of wealth. So, they set out together and after travelling for a few days, they reached a place called Avanti. They halted there. They bathed in the nearby river and paid their respects to God in a temple. Near the temple, they met a learned sage whose name was Bhairwanand. They bowed to him and paid their respects. The sage blessed them and asked, “Where have you come from? Why have you come to the city?”

One of the friends explained, “We are coming from a nearby village. We are very poor so we have set out to try our luck and find a fortune. You are such a learned sage. Please help us by telling us how we can become healthy.”

Bhairwanand was pleased with the four friends. He gave a wick of cotton to each of them and said, “Carry these wicks and travel in the direction of the Himalayas. At whichever place your wick drops, start digging at that place. Collect whatever treasure you find buried there and go back home.”

The four friends were happy and excited. They thanked the sage and set off towards the Himalayas. After travelling a little distance, the wick in one of the friends’ hands fell to the ground. He dug up the spot where his wick had fallen and soon he found a buried treasure of copper. He was very happy. He invited his friends to take their share of copper and go back home. But the other three laughed and called him a fool. The three resumed their journey while the first friend left for home.

After a few days, the second friend also dropped his wick. He dug up the ground where his wick had fallen down and was very happy to find a large treasure of silver. He invited his other two friends to share the silver and head back home. But the other two thought that he was stupid. They wanted to go on with their journey. So, the one who had found silver returned home happily with his wealth.

After another few days, one of the remaining two friends dropped his wick. He quickly dug up the spot and was ecstatic to find a treasure of gold. He invited his friend to share the gold and return home since there was enough gold for two people. But the other friend said that since copper, silver and gold had already been discovered, there must be a treasure of diamonds in store for him. He wanted to continue the journey. So, the one who had found gold collected his treasure and returned home.

Now, the fourth friend was travelling alone towards the Himalayas with the hope that soon he would find a treasure of diamonds. He kept on going ahead, but the wick did not fall from his hand. After a while, he lost his way and started wandering aimlessly.

As the fourth friend was walking around, trying to find his way, he saw that at one place, a strange man was standing. His whole body was covered with blood and the strangest thing was over the man’s head, there was a big wheel that was whirling continuously.

The fourth friend was puzzled to see this sight. Out of curiosity, he went up to the man and asked, “Who are you? Why are you bleeding? And what is this strange wheel whirling over your head?”

The man replied, “This wheel was attached to my head too in a similar way.”
“When will I be freed from this?” the fourth friend asked, wailing in pain.
“When someone else comes along and speaks to you the way you spoke to me,” the other man answered.
“How long have you been here?” the fourth friend asked.
“I don’t know the answer to that, friend,” the man replied. “I came here during the time when king Rama was the ruler. I was a poor man looking for wealth. I got a magic wick from somewhere and came here looking for diamonds. When I reached here, I saw a man standing here with this wheel whirling over his head. I went to him and asked him the same question that you asked me.

As soon as I did that, the wheel came over my head.”
“But if you have been here for so long, how did you manage your food and other necessities?” the fourth friend asked, his terror increasing every moment.
The man replied, “You don’t feel the need for food or water. Nor does sleep, old age or death affect you. All that you can feel is pain and that can go on for centuries until someone with a magic wick approaches you. The truth is that Kuber made this wheel in order to guard his wealth against thieves and robbers. Anyway, I must leave now.” Saying this, the man walked away, leaving the fourth friend alone.

Many days later, the third friend, who thought that his friend was taking too long to return home, decided to go and look for him. After traveling a lot, he reached the place where his friend was standing, drenched in blood and suffering from intense pain.
The third friend was astonished. “What has happened? What is this?” he asked.
The fourth friend replied, “This has happened only because of my greed for wealth.” He told his friend the whole story of how he came to be in this situation.
The third friend was very upset. He said, “I am very sorry for you, my friend. But when I offered you a share of my gold, you refused. You wanted more wealth. Now nobody can help you. I will hope the best for you.” Saying this, the third friend walked away with a heavy heart.