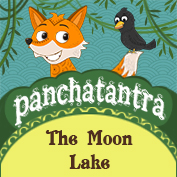 Once a large herd of elephants lived in a jungle. Their king was a giant and impressive tusker. He looked after all the members of the herd with utmost love and care.
Once, a severe drought hit the area. All the birds and the animals started dying out of thirst. The elephant king knew that he had to find water as quickly as possible. He asked the members of the herd to go in different directions to look for water. One of them found a large lake full of water in the woods far away. The king was very happy and ordered all the elephants to make their way to the lake.

The elephants started clearing up the way to the lake for all the members of the herd. There was a colony of rabbits also on the way to the jungle. In their excitement of reaching the lake as soon as possible, the elephants trampled many rabbits under their feet. All the elephants were very happy to reach the lake. They had fun and frolicked in the water the entire day in the lake and once they were thoroughly satisfied, they left.

The rabbits were in a state of panic as they knew that the elephants would return soon. Their king called a meeting. He said, “A herd of wild elephants has homed in on the lake near our colony. They have already killed or injured thousands of us. I am sure, they will come back soon. So, we must think of a way to stop them and prevent more deaths.” One little rabbit stood up and said, ” I do have a plan to drive away the elephants from this forest. I will go to meet the king of the elephants when he will come again this side.”

The next day when the rabbit saw the herd of elephants coming towards their side again, he climbed up a huge rock and shouted at the top of his voice, “O king of the elephants, hear me, please.” The king heard his voice and turned towards him. “Well, who are you?” he asked. “I am a messenger of the moon,” replied the rabbit. He further added in a firm tone, “I have come here to tell you that the moon is mighty upset with you as you have soiled his lake. He is thinking of punishing you strictly for your deed.” Upon hearing this, the elephant king got frightened. He said, “Please take me to God Moon. I will seek his forgiveness.”The clever rabbit said, “All right! Meet me alone tonight at the lake.”

The king elephant became extremely frightened and promised that he or any member of his herd would never visit the Moon’s lake again.

The clever trick of the little rabbit worked and all the rabbits lived happily, thereafter. The moral of the story is that intelligence is superior to might.