You Are Here : Home » Fun » Stories » Akbar-Birbal » Akbar Birbal: Fear Is The Key 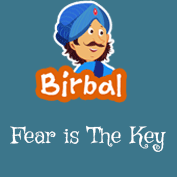 One day, Emperor Akbar said to Birbal, “Birbal, my people love me very much and that is why they are ready to carry out every order of mine willingly.”
Birbal smiled and said, “This is true, but they fear you too, Jahanpanah.” Akbar did not agree with Birbal on this and that is why it was decided that Birbal’s statement should be tested.

Next day, according to Birbal’s instructions, it was announced that the Emperor would be going for hunting, and people should pour a pot of milk in a tub kept in the courtyard. The people thought that the Emperor is out and would not come to see the tub himself, so all they poured in the tub, was some water. Next day, when Akbar returned from hunting, he found that there was not even a single drop of milk in the tub, instead there was just some water.

Akbar got very disappointed when he saw this and asked Birbal about his next move.

Birbal said, “Jahanpanah, once again announce that you are going for hunting and this time you will see the tub yourself after coming back.”

The Emperor did as Birbal said. Once again, the tub was kept in the courtyard. This time, when the king returned from hunting, he was pleasantly surprised to see the tub overflowing with milk.

Birbal said, “This proves the truthfulness of my statement, Huzoor! It is your fear which makes the people obey you. The first time there was no one to check the tub, so people poured the water, but the second time, they knew that you would check it yourself, that is why they brought the milk.”

Akbar understood that it is indeed fear that keeps people disciplined.