You Are Here : Home » Fun » Stories » Akbar-Birbal » Akbar Birbal: How Many Crows In The Kingdom 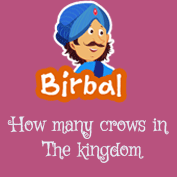 Akbar was a great Mughal Emperor and Birbal was his witty minister. One day, Akbar was taking a walk in his garden with Birbal.
Many crows were flying around. As he observed the birds flying, he thought of asking Birbal a tricky question.

He asked, “How many crows are there in our kingdom, Birbal?”
Birbal thought for a moment, and then said, “There are ninety-five thousand, four hundred and sixty three crows in your kingdom, Huzoor.”

“How do you know that for sure?” the King asked.
“You can get them counted, Huzoor.” Birbal said.

The Emperor again said, “If there are less than that, then?”
Birbal replied immediately, “That means that the rest of them have gone on vacation to some neighbouring kingdoms.”

“And if there are more than that, then?” asked Akbar.
“Then it means that other crows have come to visit their relatives in our kingdom, Huzoor,” said the witty minister.

Akbar was very pleased with the answer that Birbal gave and gave him a suitable reward.

Moral: Even if the question is silly, you can manage the situation by thinking on your feet and giving a witty answer.