You Are Here : Home » Fun » Stories » Akbar-Birbal » Akbar Birbal: The Parrot Neither Eats, Nor Drinks 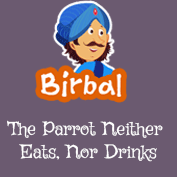 One day, somebody gifted a beautiful talking parrot to Emperor Akbar. Akbar was very fond of the parrot as it could not only talk, but also reply to his questions. He had made special arrangements for the parrot’s care and safety and made an announcement that if someone ever dared to inform him about the parrot’s death, he will be hung. All the caretakers of the parrot thus, took extreme care of the parrot and guarded him against all harm, day and night.

Still, one day, the parrot died. None of the caretakers had the courage to go and tell this to the Emperor. They went to Birbal and told him their plight. They said, “If we inform the Emperor about the parrot’s death, then he will get us hanged, and if we do not tell him, then also he will kill us, so please help us.”

Birbal thought a while and sent all of them back to work. Next day, he himself went to the Emperor and said, “Alampanah, your parrot…” Akbar said, “Yes Birbal. What about my parrot?” Birbal again stammered, “Your parrot is …” Akbar was anxious to know about his parrot. He again asked, “Tell me Birbal, What happened to my parrot?” Birbal again said, “Your parrot…” Akbar said in a firm tone, “Birbal, I am asking you, what happened to my parrot? Say something in the name of Allah!”

The Emperor understood why Birbal had to break the news of his parrot’s death like that. He did not punish any of the servants and appreciated Birbal for his intelligent move.