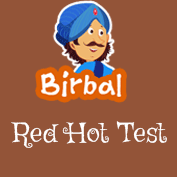 One day, a rich man wanted to get an innocent man named Hasan, punished for some grudge that he held against him. He accused him of stealing his wife’s valuable necklace, and reported this theft in the Emperor’s court.

Emperor Akbar asked the man, “Why do you think that Hasan has stolen the necklace from your place?” The rich man replied, “Your Majesty, I have myself seen him stealing the necklace!” Hasan said, “No Huzoor, I am innocent! I do not know anything about the necklace.”

The rich man said, “Huzoor, if he is innocent, ask him to prove his innocence by holding a hot iron rod in his bare hands. If he is able to do so, then I will believe that he has not stolen my necklace, and he is speaking the truth.”

The rich man also convinced the Emperor that if Hasan was telling the truth then the holy deities above would not let any harm come to him and it was the most ideal way to test the innocence of the accused person. The Emperor ordered Hasan to appear in his court the next day and do as directed by the rich man.

Poor Hasan was at his wit’s end. He went to Raja Birbal for help. Birbal could understand that the man was telling the truth and suggested a clever idea to him.

When he returned the next day, he said, “I am ready for the test. But the same thing should be applied to the rich man as well. If he is speaking the truth, then the red hot iron should not burn his hands also. So, first let him hold the hot iron rod in his hands, and then I will hold that iron in my bare hands.”

Now, the rich man was speechless! He requested the Emperor Akbar to let him go and look for the necklace again in his house; maybe his wife had misplaced it somewhere in the house itself.

Emperor Akbar ordered the rich man to give the necklace to Hasan as a punishment and praised Raja Birbal for his clever idea.