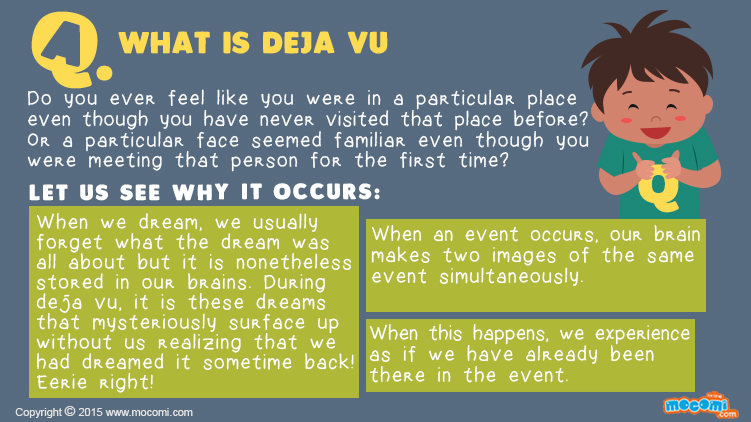 What is Deja Vu?

When these things happened to me, I thought I was a psychic to know all the things before they even happened! Even though as interesting as the idea of being a psychic appears, there is a very logical and scientific explanation to this ‘unnatural’ experiences.

Our brain is an amazing biological machine which never fails to amaze us! One such wonder that happens in our brain is Deja vu. It is actually an abnormality of our memory!

The term Deja vu is a french word that means ‘already seen’.

There are many theories that explain this phenomenon. Some of the theories are given below

What is Jamais vu?

The opposite of deja vu is known as jamais vu. It is a phenomenon of brain where rationally we know we have been to a place or know a person or a word before, but our brain gives a sensation of not reconsigning it! Jamais vu is a french word that means ‘never seen’.

The person who experiences Jamais vu feels weird not to recognize the event that has already happened! It is sometimes also associated with amnesia and epilepsy.

Why do Camels have Humps?