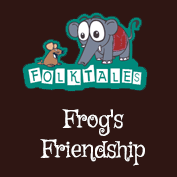 Long ago, the frog’s legs were not as thin and spindly as they are now; neither did they live in their watery homes. They lived on land and had extremely thick legs. It’s the frog’s friendship with a tiger that changed a frog forever.

The frog and the tiger were the best of friends. The frog would often visit the tiger’s den. They would chat for hours, share jokes and have meals together. In times of need, they would also help each other out.

One day, the frog decided to invite the tiger for a meal. The frog had a pretty little house under the shrubs. “Dear friend, I have visited your place so many times and you treated me to delicious meals every time. But you have never come to my house. I would like to invite you to my place for dinner tonight.”

The tiger accepted the invitation gladly. Suddenly, the frog realised that the tiger only had meat for dinner. He went around everywhere looking for meat, but could not manage to find any. The frog was tired and dejected. He was embarrassed and did not know what to serve the tiger for dinner.

In the evening, the frog was still in deep thoughts about the dinner when the tiger knocked at the door. The frog’s heart leaped with fear. He couldn’t think of anything and decided to serve his own flesh for dinner to his friend. He went inside his room and started biting his legs to take out flesh from them.

Each time he bit into his legs, he screamed out in pain. Hearing the screams the tiger got worried and rushed to his room. The tiger was shocked at the sight of the frog biting his legs. “What on earth are you doing?” asked the tiger horrified.

“I did not have any meat to serve to you, so I was biting my legs to take out flesh.”

But the frog was still sad and embarrassed. He left his home forever and went underwater. There he built tiny houses and started living in them and he also learnt how to swim. Gradually, his legs became thin and spindly.