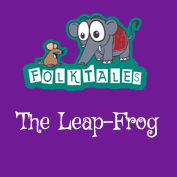 One day, a grasshopper, a flea and a leap frog were engaged in a deep discussion. They wanted to find out who among the three of them could jump the highest. They invited the entire world to come and watch them jump. “Look at the three famous jumpers of the world,” said everyone when they were gathered in a room.

Any competition in the world always has a prize for the winner. “I will give my daughter’s hand to the one that jumps the highest,” proclaimed the king.

The flea was of extremely sophisticated manners. He stepped forward and bowed respectfully to the king and all the other spectators. He was of  noble origin and was accustomed to human society.

The grasshopper followed. He was heavier than the flea but equally polished in his manners. He wore a sophisticated green uniform. He introduced himself politely and said that he belonged to the Egyptian family and was much respected among his people. He was taken out from the fields, where he lived originally, and placed in a pasteboard house. The multi-storey house was made of court cards with windows and doors cut out of the queen of hearts. “I am an extremely talented singer,” the grasshopper said. “My music is so powerful that even the great native grasshoppers that learnt music right from childhood felt ashamed when they heard me singing.”

The grasshopper and the flea made the best efforts to prove that they were the perfect match for the princess.

The leap frog remained quiet. The house dog sniffed the frog and declared that he belonged to a good family. The councillor also declared that the frog was indeed a prophet and stated that it was in the back of the frog that one can see if the winter would be mild or severe. It was very rare, as a thing like this cannot be seen even on the back of a human who writes an almanac.
It was finally time for the trial.
The flea jumped extremely high. No one could find out where he actually went. So everyone assumed that he actually never jumped. The grasshopper jumped half the length of the flea and finally landed on the face of the king. The king certainly did not take it well.

The leap frog arrived and stood at the spot for a very long time. Everyone was bored and asserted that he would not jump at all.

“I think he is not feeling well,” said the dog, when suddenly the leap frog jumped and landed on the lap of the princess who was sitting next to the king.

The king said, “My daughter is the most precious to me. There is nothing above her and so, to bound up to her is the highest jump in the world. One requires a lot of understanding and strength of character to do such a thing. The leap frog has shown that he has it in him to be worthy of marrying my daughter.”

Thus, the princess was married to the frog.

The flea was disappointed and said, “I really do not care, the princess can have the frog. My jump was indeed the highest, but these days no one really values real merit. People are just influenced by a fine exterior,” He finally went into the foreign services, where he was believed to be killed.

The grasshopper was also heartbroken and started singing his usual song of melancholy.