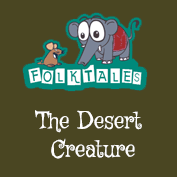 Thousands of years ago, life was very difficult. There were no machines and men had to do all the work by themselves. A large number of people travelled from one place to another in search of food, water and shelter. These people were called nomads.

One day, a man was walking on the sand in the desert, when suddenly he noticed a strange and frightening creature. It was a big, brown coloured animal which had a long neck, a huge hump and very thin, long legs. The man was extremely scared and ran away immediately.

The next day, once again he came across the same creature. This time it was drinking water from a lake. The man was amazed by the sight as he saw the huge animal drinking water continuously by putting his long neck into the lake.

The creature suddenly realised that it was being watched; it lifted its neck and stared directly into the eyes of the man. This time the man was not scared and neither did he run away, as there was a huge expanse of water between them. Fascinated, the man stood and stared at it for quite sometime. The animal, however, made no attempts to come closer.

In the next few weeks, the man came across a large number of these creatures in the desert. They moved around throughout the desert aimlessly, walking miles after miles. The man got more and more interested in them and started observing them very closely. He noticed that despite their huge size, these animals were extremely gentle and harmless. Moreover, they were vegetarians.

He also realized that the creatures had extreme stamina, as they could walk around for miles after miles in the desert without being exhausted.

After observing them for a while, the man suddenly had an idea. He thought to himself, “If I can manage to tame them, then I can make them carry all my stuff and I can start living in the desert.”

So, one day, when one of these creatures was sleeping, the man put a bridle in its mouth. He then went about riding it all around the desert, with a large amount of weight on its back. Gradually, he tamed the animal and after sometime, he also allowed his son to ride it in the desert all by himself.

With that, man finally tamed the animal of the desert, which later came to be known as the camel. Thus, till date the camel has lived up to its reputation, of being ‘the ship of the desert’.