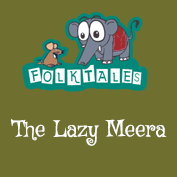 Once upon a time, there was a girl called Meera. She was very lazy. Her mother was very poor. She used to ask Meera to spin thread from cotton so that she could sell it in the market. But lazy Meera never wanted to do any work. One day, Meera’s mother lost her temper and scolded her. Meera started crying. Just then, the queen of the kingdom happened to pass by their hut. She heard someone crying so she came inside to see what had happened. When she saw Meera crying, she asked Meera’s mother why the girl was crying. Meera’s mother did not want to tell the queen the real reason. So she made up a lie and said, “Your highness, this girl always wants to keep spinning thread. But I am too poor to afford so much cotton.” The queen said, “I have a lot of cotton that needs to be spun. I will take your daughter with me.”

The queen took Meera with her to her palace and showed her three rooms full of cotton. She said, “You are a nice girl, Meera. If you spin all this cotton into thread, I will get you married to my son, the prince.” Then, the queen left Meera with the cotton and went away.

But Meera just sat there and did nothing. She kept crying because she did not want to spin the cotton. After three days, the queen came to see how the work was progressing. She found Meera sitting there, weeping. She explained to the queen that she was feeling homesick. The queen consoled her and told her to get on with the spinning.

Now Meera was in a fix. She kept staring out of the window and weeping bitterly. Suddenly, she saw three old women coming towards her window. One of them had a flat foot, the other had a hanging lip and the third one had a flat finger. They asked Meera why she was sad. When Meera explained the situation, they agreed to help her. They had one condition. Their condition was that when the work was done and Meera got married to the prince, she would have to invite the three old women to the wedding feast, introduce them to the queen as her aunts and eat at the same table with them. Meera agreed to this condition immediately.

On the wedding day, Meera invited the three old women to the feast. She introduced them to the queen as her aunts and the queen welcomed them warmly. Meera also ate with them at their table. The three women became very happy and blessed the newly-wed couple. When they were about to leave, the prince asked them, “Please don’t mind, but I’m curious to know, why does one of you has a flat foot, one has a hanging lip and one has a flat finger?”

The woman with the flat foot replied, “I have a flat foot because of cleaning cotton. She has a hanging lip because of wetting cotton and the third one has a flat finger because she spins cotton with her fingers.” On hearing this, the prince decided that his wife would not do any more spinning otherwise she would become ugly. From that day onwards, Meera lived happily and comfortably with the prince.