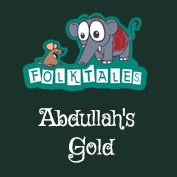 Abdullah, a very rich man, lived in a small town. Though he was one of the richest men in town, he lived like a poor man. He wore tattered and worn out clothes and moved around like a beggar. He believed that there were a lot of people waiting to rob the rich of their wealth, so he pretended to be a poor man to save himself from being robbed. But he actually didn’t have to pretend much. He was extremely stingy and found it very easy to live the life of a poor man.

Small kids in his locality screamed, “Kanjoos Chacha!” whenever he passed by them in his tattered clothes. Abdullah, however, did not care about anything. As days passed, he became more and more satisfied with his accumulated wealth.

Abdullah did not ever spend his money on anything, so one day, he bought a huge block of gold with his accumulated money. He did not want anyone to know about the gold so he dug a deep hole near an unused well and buried the block in it. He was certain that no thief would ever guess where the gold was hidden and his wealth would be completely safe. Every single day, Abdullah paid a visit to the place to check on his gold.

However, Abdullah did not realise that it was impossible to keep a place hidden if he visited it every day. Soon the people of the town started whispering about Abdullah’s visit to the mysterious place. One day, a curious man decided to solve the mystery of Abdullah’s suspicious visits. He visited the place and found the gold. Overjoyed, he went back home with the block of gold.
On his next visit, Abdullah found the hole empty—all his wealth was gone. Abdullah was shattered and started sobbing like a child.

Seeing him cry, one of the neighbours said, “If you really miss your gold so much, then please place a big rock into the hole and stare at it every day.”

Abdullah became angry with his words and said, “How can you make fun of me when you can see that I am so upset?”

The neighbour came close to Abdullah and said, “I have no intention of making fun of you or hurting you, but even when you had the gold, you never really did anything with it other than staring at it.”