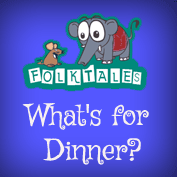 There was a little hen that lived on the edge of a forest. She was friendly and active. She lived alone and did all her work by herself. Every day, early morning, she went to hunt for worms in the forest, after which she would clean up the house, cook for herself, eat and sleep comfortably. In the evenings she would go out and meet her friends and would come back by dawn. Overall, she was leading a peaceful and comfortable life.

In the same colony, there also lived a lazy fox with his very old mother. The fox was so lazy that he would hardly go out for hunting. He would simply get hold of the first animal he came across and bring it home to eat. One day, the fox family did not have anything to eat. The fox was feeling too lazy to go out and was contemplating how to arrange for food without working hard. Suddenly, he thought of the hen. He wanted to kill the hen and eat her for dinner.

The animals of the colony where the hen and the fox lived followed a strict rule. It was that even on being very hungry, you were not allowed to hunt animals within your own locality. But it was alright to hunt from other colonies.

The animals living in that area always followed the rule very stringently. Earlier,it wasn’t difficult as the forest was dense and the animals of the neighborhood found plenty of prey in the other localities. However, of late it had not been like that. With the cutting down of the trees, the animals started disappearing and it had become more and more difficult to find prey to hunt.

So the fox told his mother, “I will be catching that stupid hen for dinner. You keep a pot on fire and boil water. When I come back, we will cook it and have it together.” Saying this, he left the house.

The fox reached the house of the hen. The hen came out to gather wooden sticks to light a fire and left the door open when she went inside. Slowly and swiftly, the fox entered the house of the hen. It hid behind the door and waited for the hen to come in. As soon as the hen came inside the house, the fox pounced on her, captured her and put her inside a sack. He then tied the mouth of the sack and carried it on his back.

The fox was in such a hurry to run back home that he didn’t even notice the movements in the sack. Meanwhile, the hen took out a sharp knife from her pocket. She made a hole in the sack and jumped out of it. To avoid arousing the fox’s suspicion, she immediately put a big rock into the sack.

The fox reached home happily. “Is the water boiling, Mother? I have caught the hen and we shall have it for dinner,” the fox said, salivating with excitement.
“Yes, the water is boiling hot,” replied the fox’s mother.

Just then, the fox untied his sack and emptied it into the water. The big rock fell into the water. A large quantity of hot and boiling water splashed out of the pot and fell on both the foxes, killing them instantly.