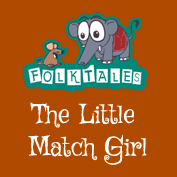 It was one of the coldest days of the most terrible winter ever. It was dark and the sheets of white snow covered everything—the streets, cars, the rooftops of the houses and the trees. It was a beautiful sight on the last day of the year. Along the beautifully lit snow-covered streets walked a pretty little girl, with bare head and naked feet. She wasn’t barefoot when she had left her house. She was wearing her mother’s slippers though they were too big for her tiny little feet. But she lost them while she ran across the street to save herself from getting run over by two large carriages.

The little girl kept walking slowly along the street. By now her tender little feet had turned blue and red with cold. She carried a bundle of matches in her old and tattered apron. All through the day, no one had bought a single match from her. She had not earned even a single farthing.

The girl was shivering with cold and hunger. Her beautiful, long hair was covered with little snow flakes. It was the eve of the New Year. The air was filled with the delicious smell of roasted turkey and goose and the houses looked beautiful with the gleaming light of the candles that shone out of the windows. The poor girl grew colder and colder. But not once did the thought of going back home cross her mind. She knew that she had not earned a penny and her father would certainly not spare her for that. Her house wasn’t very warm either, for the chilled winds always filled her room through the giant cracks on the ceiling and made her shiver at night. So, quietly, she sat down in the corner between two large houses.

The poor girl’s mind and body was now numb with cold. She stretched her tiny hands and took out a match from the bundle. She knew she could not afford to light too many of them. ‘Chishhh’ came the sound of the match that she lit. Her face looked like that of an angel when the beautiful light of the match fell on it. It was delightfully warm and she felt like she was sitting on a warm wooden floor in front of a huge fireplace. But as she stretched out her hands to warm herself, the fire from the matchstick vanished immediately.

Unable to bear the cold, she burnt another match. As soon as the light fell on the wall of the house, in the corner of which she was sitting, the wall became transparent. Almost like a veil, she could see through the wall. Inside the room, she saw a beautiful table covered with a dazzling white cloth. On the table was a large plate filled with a deliciously roasted goose with a generous stuffing of dried plums and apple. Suddenly she saw that the goose climbed down from the table, and was crawling towards her with the knife and fork stuck to its breasts. She was about to pick up the goose when suddenly the light of the match went out and she was left staring at the damp white wall of the house.

Hurriedly, she lit up another match. This time she saw the most magnificent Christmas tree ever. It was larger and more splendidly decorated than any Christmas trees she had ever seen. It was full of glittering stars, doves and angels with little gift boxes hanging from the tree. She kept staring as the light of the Christmas tree rose extremely high; she now saw them as the stars on the heaven. Suddenly, she saw one of the stars falling from heaven; it fell on the ground and formed a beautiful long trail of fire.

“Oh I think someone just died!” exclaimed the little girl, as she remembered that once her grandmother told her that it is only when a soul ascends to God that a star falls from heaven. She never forgot her beautiful grandmother, whom she loved so dearly and who was the only person who had ever loved her. She lit up another match and this this time in the light of the match, she saw her beautiful grandmother standing and smiling at her. The love in her grandmother’s eyes made her weak. “Please take me with you, Grandmother. I don’t want you to go away like the Christmas tree and the delicious goose. I know you will disappear as soon as the light of the match is gone,” saying this she burnt a bunch of matchsticks, determined to not let her grandmother vanish this time. The grandmother extended her arms and picked up the little girl and they both disappeared into the world of peace, love and joy; a place where there were no tears, hunger or pain; a place called heaven.

But at the corner of the street, leaning against the wall sat a pretty little girl with a smile on her lips, frozen to death, on a bitter winter night. She was holding a bunch of half burnt matches in her hand. “Poor little girl, must have been trying to warm herself,” the people on the street said, as they looked at her with pity. Little did they know about the lovely things that the girl had just seen and the splendour and joy with which she entered the New Year.