You Are Here : Home » Learn » New World » Answer me » Is there Life on Mars?
DOWNLOAD 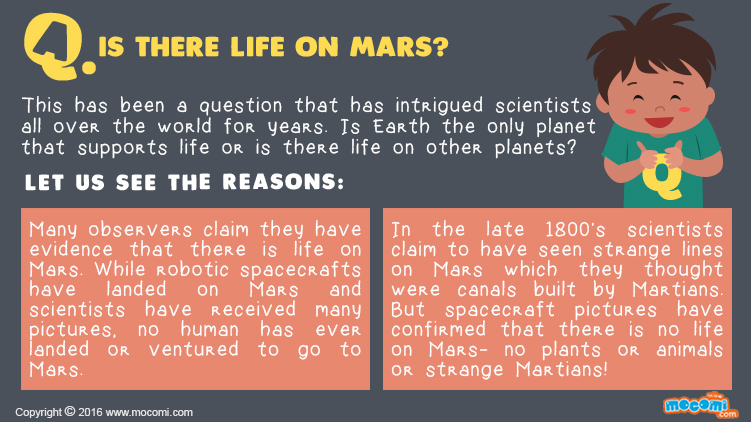 Mars is a very cold and dry planet. It does not support liquid water in any form because of its dry surface. Mars does have extremely high mountains which have ice on the caps. Some areas also have frozen ground but no running water.

Mars is similar to Earth and that is the reason why scientists want to discover life on it, but Mars’ atmosphere gives it away. The Earth has a magnetic field that helps in driving away dangerous particles of space radiation from the atmosphere. Mars does not have such magnetic field, thus harmful space radiation reaches its atmosphere resulting in very less air and no life.

All life on Earth depends on water. Since Mars does not have any source of running water, life is impossible there.

Scientists are trying to discover and study fossils on Mars to see if there was once life on the planet and maybe it did not succeed like us at home!

Why do Bats hang upside down?