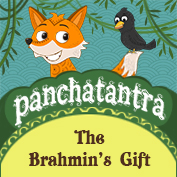 Once, a pious Brahmin named Mitra Sharma, lived in a small village. He was called by many people to conduct religious ceremonies at their homes. On one such occasion, he was rewarded with a goat by a wealthy man for his services. The Brahmin happily put the goat over his shoulders and started the journey towards his home. On the way, three conmen saw the Brahmin with the goat.

All of them planned to fool the Brahmin and take away the goat. They separated from one another and took different hiding positions at three different places on the same route on which the Brahmin was going.

After some time, the first conman came out of his hiding place and asked Brahmin in a surprised tone, “Respected Sir, what are you doing? I don’t understand why a religious man like you is carrying a dog over his shoulders?” The Brahmin was shocked to hear his words. He shouted back at him, “Are you blind? Can’t you see that it not a dog but a goat!” The cheat replied, “Dear Sir, I beg your pardon. I told you what I saw. I am sorry, if you don’t believe it.” The Brahmin was furious, but calmed down after a while and continued his journey.

The Brahmin had barely walked a distance, when the second conman came out of his hiding place and asked the Brahmin, “Sir, I see that you are carrying a dead calf on your shoulders. You seem to be a wise person. I wonder why you would do such an act of stupidity.” The Brahmin yelled at the top of his voice, “What? How can you mistake a living goat for a dead calf?” The second cheat replied, “Sir, I think you don’t know how a goat looks like. I just told you what I saw. If you do not believe me, please carry on.” Now, the Brahmin was a bit confused, but continued to walk further.

Now it was time for the third cheat to meet the Brahmin. He walked towards the Brahmin and asked with a big grin on face, “My dear Sir, why do you carry a donkey on your shoulders? I am sure you are a jester or else why would you do such a foolish act.” This time the Brahmin did not say anything. The third cheat walked back triumphantly to his friends; he could see that their trick was working.

The Brahmin was completely bewildered and stood frozen on the road. He thought that the goat gifted by the rich man was some sort of a ghost, because it first took the shape of a dog, then a dead calf and finally transformed itself into a donkey. The Brahmin got scared to such an extent that he dropped the goat on the road and ran away from there. The three conman had a hearty laugh at the gullible Brahmin. They picked up the goat and feasted on it.

Dear children, that is why it is said that one should not get blindly carried away by what others say. We must believe our own eyes rather than going by what other people say.