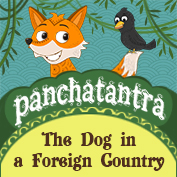 In a certain country, there lived a dog, by the name of Chitranga. Once, that area was hit by famine and the animals started to die out of hunger and starvation. Chitranga decided to move to some other country in search of food and water.

He travelled a lot and finally reached a foreign country where there was plenty of food and water available. At one place, because of the negligence of the woman who lived there, the door of a house was left open. Chitranga got inside the house and feasted on various kinds of delicious food. But, when he came out, all the dogs that lived nearby attacked him. Chitranga had to run for his life.
Hunger brought Chitranga back to the woman’s house. Since the woman was not at all careful about keeping the door locked, Chitranga used to daily break into her house and eat whatever he could find there. After he would come out of the house, as usual, the other dogs on the street would chase him and bite him all over his body.

Chitranga became very sad. He thought to himself, “I must go back to my country and live in peace, instead of getting tormented by the members of my own tribe here.” And on that note, he started his journey towards his own country.

When Chitranga arrived in his country, his friends and relatives surrounded him with curiosity and asked him many questions relating to his foreign travel. They asked him:
“Oh friend! How did you spend your time in the foreign country?”
“Was there enough food and water for you?”
“How did the people behave?”
Chitranga replied in a grim voice, “In foreign countries the housewives have the habit of leaving the doors of their houses open. One can enter the house freely and eat much food in the kitchen. But, there is one big disadvantage; the members of your own tribe do not accept you and attempt to kill you.”