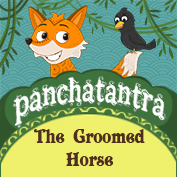 Chetak was the most well groomed, obedient and good looking horse in the locality. His owner Ram Singh was extremely proud of him. He took very good care of Chetak and never missed a chance to show him off in front of his neighbours and associates.

“There goes my young boy,” exclaimed Ram Singh each time he opened the gate to Chetak’s stable. Chetak would immediately come out galloping and would run around the whole ground. His sparkling eyes, light brown mane and shiny brown coat looked very attractive.

Ram Singh would then ride him all around the farm. The crowd would look at them admiringly and he would feel extremely proud of Chetak. “Whenever I ride him, it’s like I am flying in the air,” said Ram Singh gladly.

Chetak’s old groom had to quit for some reason, so Ram Singh hired a new groom for him. Ram Singh loved Chetak to pieces, so he hired the best groom in the town to take care of Chetak. Baloo, the new groom was very famous and supposedly all the horses groomed by him always ended up looking way better than they had ever done before. Chetak too became very handsome and even more attractive under Baloo’s grooming.

Early every morning, Baloo would start with his grooming process. He would bathe Chetak carefully and comb his tails and brush his coat till it started shining. Hours passed this way and Chetak looked well groomed every day.

But for some reason, Chetak was not happy. His beautiful eyes lost their sparkle and he became very inactive. Earlier, he would jump and gallop out of his stable as soon as the door was open. However, these days he almost had to be coaxed to get up and run. “What exactly is wrong with him?” thought the worried owner, and decided to find out for himself.

One day, he went inside Chetak’s stable to investigate and find out the reason behind the drastic change that had came upon his most loved companion. While walking through the stable, Ram Singh suddenly stumbled upon a stack full of oats. He was taken by surprise as those oats were meant for Chetak. Ram Singh had instructed Baloo strictly to feed them to Chetak thrice a day. Later, he found out that Baloo, instead of feeding Chetak with the oats, was actually saving them to sell them off at a lower price in the market.

Ram Singh got very angry and asked Baloo, “Why did you keep the oats aside, while they are meant to be fed to Chetak?” Baloo was absolutely unrepentant and replied, “So what? He does not need to eat that much. Moreover, I do everything possible to make him look good—I rub oil on him and brush his coat to make him look this nice.”

Ram Singh lost his temper. He shouted, “I appointed you to take care of him and keep him in good condition. I don’t care if you are grooming him nicely when he is starved and unhappy.” Saying this, Ram Singh dismissed Baloo immediately and started taking care of Chetak personally.