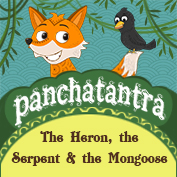 Near the mountains in the north, on a fig tree on the banks of the river Amravati, lived a pair of herons. A wicked black serpent also lived in a hole of that tree. Whenever the heron couple had babies, he used to slither up the tree and eat the herons’ young ones.

Once, when the female heron was lamenting over the loss of her babies, another heron who lived on the nearby tree approached her and advised, “Dear sister, I can understand your pain. I will tell you a way to get rid of the diabolical serpent forever. Next time, when you have your babies, scatter some pieces of fish meat from the mongoose’s burrow to the serpent’s hole in your tree. The mongoose loves to eat fish. He will certainly follow the trail and reach the serpent’s hole. I am sure when the mongoose will see his mortal enemy, the black serpent, he will kill him.”

The next time the female heron had her babies, she did what her neighbor had told her to do. As foreseen, the mongoose followed the fish trail, happened to see the serpent and killed him. However, the mongoose also got the smell of the heron’s newly-born young ones. He quickly climbed up the tree and ate them all.
The neighboring heron felt miserable and guilty for giving advice unthinkingly. He said to himself, “When one thinks of a plan, one should also think of its consequences.”