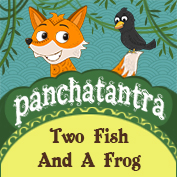 Long time back, two fish named Sahasrabuddhi and Satabuddhi used to live in a lake. They were friends with a frog whose name was Ekbuddhi. One day, as the three friends were having a good time together, they saw some fishermen near the lake. They were taking amongst themselves about coming to that lake the next day with their nets and catching the fish.
The frog was very disturbed to hear the conversation of the fishermen. Ekbuddhi, the frog asked Sahsrabudhhi, “Dear friend, you just heard about the fishermen’s plan. Now, what should we do? Should we remain in the lake or go somewhere else?”

Sahsrabuddhi replied, “Dear Ekbuddhi, you should not be scared by just words. The learned have said: ‘The world is still safe because the dreams of snakes and wicked men never come true’. The fishermen may not even come tomorrow! Even if they do, we will think of something to save you and ourselves. There is no need of unnecessarily getting panicked.”
Satabuddhi said, “You are a genius, Sahsrabuddhi! What you say is correct. There is nothing that accomplished men cannot conquer. Even the great Chanakya had single handedly killed the entire army of Nandas.”

Then, Ekabuddhi, the frog, said, “Friends, I am not as learned or brave as you are. The only thing I know is to leave the place where there is an impending danger. So, I and my wife will leave this place tonight itself.”

Accordingly, the frog left the lake immediately. Next day, the fishermen arrived early in the morning near the lake. They cast their net and caught a lot of fish, frogs, crabs, turtles etc. Satabuddhi and Sahasrabuddhi were also caught and killed by the fishermen.

Ekbuddhi, who was watching all this from the distance mourned over the death of his foolish and overconfident friends.