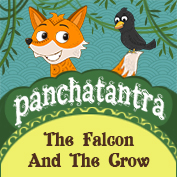 Once upon a time, a large falcon used to live on a high mountain. One day, the falcon was looking for his prey. He saw a rabbit scampering about on the ground below. The falcon suddenly swooped down, caught the rabbit in his sharp talons and, in an instant, flew back to his nest high up in the mountain rocks.

A crow who used to live in a tree on the ground, saw the falcon perform this thrilling act and was highly impressed. He thought of imitating this act. So, the crow flew up high into the sky. From high above, he located a rabbit on the ground and swooped down with great force to catch the rabbit. But the crow’s aim was not sharp enough and he missed his target. Instead of catching the rabbit, the poor crow dashed against some jagged rocks. He broke his neck and cracked his skull and died immediately.

This is why it is said that we must never imitate others foolishly.