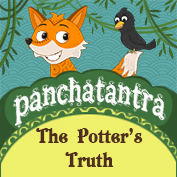 In a certain town, there lived a potter, by the name of Yudhisthira. One day, he fell down in a pit under the influence of alcohol and hurt himself on the forehead. The wound healed, but it left a big scar on his forehead.

After some time, there was famine in the country and the potter decided to go to the king’s capital and join the royal army to earn his livelihood.
When the king’s recruiters noticed the big scar on the potter’s forehead, they thought to themselves, “This man has such a big battle scar on his forehead. He must be a very brave man.” And thinking on those lines, they placed the potter amongst the royal warriors with great honour.

When the other warriors saw that he was being favoured just because of a scar, they became jealous but could not say anything because they feared the king.

One day, an enemy country launched a massive attack on the kingdom. The king himself came to inspect his army and when he saw the potter, he asked him, “O brave warrior, in which battle did you get this scar on your forehead?”
“Your Majesty!” replied the potter. “I did not get this scar in a battle. I fell down in a pit because I was very drunk and this is how I got this scar. Otherwise, I was a potter by profession before I joined your army.”

When the king heard this, he got very embarrassed and asked the potter to leave his palace immediately. The potter requested the king, “Your Majesty, Please do not throw me out of your army. Put me to test in a battle.”

The king replied, “No doubt you have some excellent qualities, but it would be better for you to go home. The moment the other warriors come to know that you are a potter and not one of them, they will kill you.”

When the potter heard this, he quickly left the palace.

The wise indeed say: Continue being what you are or else you pay for it.