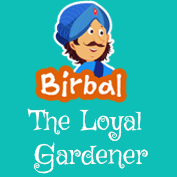 One day, Akbar was stumbled on a rock in his garden while taking a stroll. He was already in a foul mood that day and this accident made him so angry that he ordered for the gardener’s arrest and execution.

The next day, at the time of execution, the gardener was asked what his last wish was before he was hanged, he requested an audience with the emperor.  His wish was granted and he was brought in the royal court.

He greeted the Emperor and then walked towards his throne, saying that he wanted to just have one last close look at the Emperor. When he came near the Emperor, he loudly cleared his throat and spat at the feet of the Emperor.

The Emperor’s anger knew no bounds and he demanded to know why the lowly gardener did such an outrageous thing. The gardener had done this on Birbal’s advice. He stepped forward in the gardener’s defense and politely said, “I do not know of a person that is as loyal to you as this unfortunate gardener. Fearing that tomorrow people may criticize you for taking his life for a small reason, he went out of his way to give you a genuine reason for ordering him to be hanged. He has done his final duty for you. Now he can leave for his heavenly abode peacefully.”
The Emperor realized his mistake and set the gardener free.