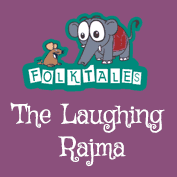 Once, a poor old lady was hungry. She found some rajma seeds and decided to cook them for her meal. She had some coal which she lit with the help of some grass and then she put the rajma seeds inside the pot on the burning coal to cook them.

But one rajma seed escaped and fell out from the pot. While the rajma seed was thinking about how to get away to safety, one piece of burning coal and one blade of grass also fell out. The rajma seed said to the coal and grass, “Friends, we are lucky to have fallen out. This old woman is going to kill us. Let us get away from here.” The coal and grass agreed.

They started walking together and soon reached the edge of a stream. They could not figure out how to cross the stream. At last, the grass suggested, “I will lie across the stream from this end to the other and both of you can walk over me one by one.” The coal and the rajma thought that it was a good idea. So, the grass lay across the stream and the coal started walking over it. But midway, the coal got scared and turned over. As it turned, the grass caught fire and burnt away. The coal was dropped into the water and put out. The rajma was standing on the bank of the stream. On seeing all this, he started laughing and jumping. It jumped so much that its stomach split open into two parts. The poor rajma lay there dying when a tailor came that way and took pity on the rajma. He stitched up the two halves with a cream coloured thread and the rajma was saved. From that day, you can see the rajma with a cream coloured stitch.