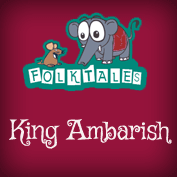 King Ambarish was a great ruler and an ardent devotee of Lord Vishnu and used to keep Ekadashi fast every year. Pleased by his devotion, Lord Vishnu gave him the ability to control the Sudarshan Chakra as a reward. Lord Indra, king of the Devas, grew jealous of king Ambarish and felt his position was being threatened. So, he came up with a plan to end King Ambarish’s Ekadashi fast and destroy him. Lord Indra approached Maharishi Durvasa and instigated him against king Ambarish.

King Ambarish’s priest reminded him to break the fast during the auspicious Dwadasi Tithi or his fast will not bear any fruit and will be ineffective. Seeing king Ambarish in a dilemma, his priest asked him to break the fast by drinking a sip of water and then he could later eat food with the sage. Considering the suggestion, King Ambarish took a sip of water to break his fast. Maharishi Durvasa saw him and became red with anger as King Ambarish was successful in breaking his fast. Maharishi Durvasa blamed King Ambarish of dishonouring him and in his fit of rage plucked a hair from his head and threw it on the ground hence releasing a demon called Krtya on king Ambarish.