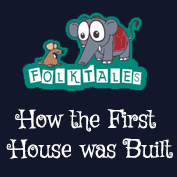 A very long time ago, human beings were very tiny, not much taller than a hen.

They did not have houses and used to live on trees. However, it was not very comfortable to live on a tree. When the rains fell, they would get completely drenched; they froze in the winters and sweated madly during the summers.

Life was very difficult. So they decided to live in burrows, like rabbits do. They thought that by living underground, they could protect themselves from the heat and the sun and also stay dry during the rains. However, even that did not work as the roof kept falling on them and they were often trapped.

After a lot of thought, human beings finally decided to make tree houses. They created small umbrellas with the branches of the trees and lived under them. But the houses did not have walls and they still got affected by the cold and heat.

Finally, after a lot of trial and error, they learnt how to make houses with walls. They were comfortable and finally saved themselves from the harsh weather.

Life became better. Human beings also started building houses close to each other, so that they could live together and never feel lonely