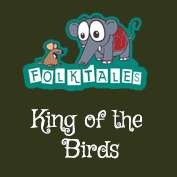 So, one fine day, they decided that they would choose a king for the bird community. A meeting was called to resolve the issue.

“But who can be a good king?” discussed the birds. The Mynah replied, “The one who can fly the highest can be chosen as the king.” All the birds agreed to the decision.

The eagle who was extremely proud and always boasted about himself said, “It will be a very easy decision. Everyone knows that I can fly the highest. I will be the king of the birds.”

“Oh but you still might not win,” said a sparrow in its squeaky little voice. The eagle turned its head and saw the little sparrow, “Really? So you think you can win? Haha, you little bird, you can be really funny,” said the eagle mockingly.

“We will see,” the Mynah said on hearing their argument.

A race was fixed to decide who flew the highest. All the small, middle and big sized birds gathered for the race. As soon as the owl hooted, “Whoo, whoo,” all the birds started their flight.
Higher and higher went all the birds and made a beautiful picture in the sky.

After a while, they started getting tired and dropped from the sky, one after the other. The eagle was the only bird that was strong and was still flying high. Within a short time, all the birds were back on the ground, except for the eagle. As he saw that all the birds had given up, he came down slowly and told the others, “So, I think I was right when I said that I would be the king, I flew higher than anyone else.” Just then, a tiny little sparrow came out from under the eagle’s wings and flew higher in the air. He said, “No Mr. Eagle, I can fly even higher than you. I am the king of the birds.”

The eagle did not realize that all this while the sparrow was flying under its wings.

All the birds agreed with the sparrow and he was chosen the king of the birds.

The eagle was very jealous and could not tolerate the sparrow sitting on the king’s throne.He grabbed the sparrow with his sharp claws and threw it on the ground. The sparrow fell on the ground with a thud and realised that a part of its tail was missing. The eagle had actually torn off its tail. However, the sparrow did not mind much because he had become the king of the birds anyway.

The sparrow has had a short tail ever since.