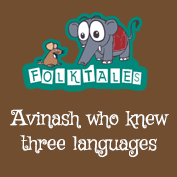 Avinash did not mind living in the forest at all. He was friendly with the animals. The birds told him to go to the city of Patna and meet the king. He followed their advice and reached Patna. He asked the king if he could get a place to stay. The king replied, “The only place available is a place that we call the palace of dogs. It is a big palace where many dogs live. They are a nuisance because they bark all night and do not let anyone sleep. Also, they come out and bite people. If you can manage, then go and stay there.” Avinash agreed.

He went to the palace of dogs and talked to the dogs. The dogs liked him very much. Avinash also requested them to keep quiet at night so that the people of the city could sleep in peace. The next day, he went to meet the king again and said, “The dogs living in the palace are actually very nice. They told me that they are guarding a huge treasure that belongs to a giant. If the treasure is removed from the palace, they will happily go and live in the forest and not disturb anyone.” The king was surprised on hearing this. He entrusted Avinash with the job of getting the treasure out of the palace.

So, with the help of the dogs, Avinash found the treasure and took it to the king. The king was extremely happy and adopted Avinash as his son.

After a few months, the king’s kingdom was attacked by the neighbouring ruler. The enemy had a larger army and the king was about to lose the battle. Then, one day, Avinash overheard two frogs talking. They were saying that it was very easy to drive away the enemy ruler as he was allergic to onion smoke. So, Avinash made a huge fire and put many kilos of onion into the fire. This gave off a strong smell of onion. As soon as the smoke reached the enemy’s camps, the enemy ruler withdrew his army and ran away.

The king was so happy with Avinash that he gave his entire kingdom to him. Avinash lived happily and ruled the city well.