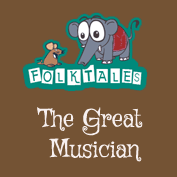 Once upon a time, a great musician lived in a small village. He had lived by himself all his life. One day when he was very old, he thought, “I should find somebody who can be a suitable companion; I am too old to live alone.” He then picked up his violin and started playing beautiful music. A wolf that was walking by was mesmerised by his music. He came to the musician and requested him with folded hands, “Will you please teach me your divine music?” “I will, but only if you promise to do whatever I say,” the musician replied. “I will be your student and you will be my master,” the wolf said. Then they started walking together. They came close to a pit and the musician said to the wolf, “Now you must jump into this pit.” The wolf immediately jumped into the pit. The musician said, “Wait here till I come back.”

After some time, he started playing his violin once again. This time, a fox was attracted by the melodious tune of the violin. The fox also came to the musician and requested him to teach him music. The musician once again said, “I will teach you, but you have to follow all my orders.” The fox readily agreed and said, “I will be your student and you will be my guru.” Then the musician took the fox to a small tree nearby. He bent the tree and asked the fox to bring forward both his paws. He then tied up both the paws of the fox with the tree and released it. Now the fox was suspended in the air. He then told the fox to wait for his return.

Some time passed and all the animals started trying to release themselves from their respective traps. The wolf managed to jump out of the pit. While he was walking, he noticed the fox hanging from the tree. The fox told the wolf, “Dear friend, the musician deceived me. Will you please release me from this trap?” The wolf helped the fox and both of them started walking. After sometime, they found the rabbit and released him too. Now, all three of them started searching for the musician.

The musician kept walking in the forest while playing his violin. This time, a young and strong woodcutter was attracted by his music. The woodcutter came to the musician and said, “Will you please teach me your music? I will be your friend for life.” Before the musician could reply, the wolf, the fox and the rabbit reached the spot. The woodcutter immediately chased them away with his axe. Thus, the musician started teaching music to the wood cutter and they became friends forever.